COVID-19 IMPACT: We are experiencing a higher than normal volume of orders, calls, and emails at this time and our staff is working hard to get product out the door. Please expect between 12 to 16 more days before orders are shipped.

Jackson Kayaks could just be the best whitewater kayak on the planet! Jackson Whitewater Kayaks have won more medals at freestyle world championship events than any other whitewater brand. Winning all World Whitewater Grand Prix events in the creek and river running kayaks that compete in a series of extreme races. Jackson Kayaks produces world class, winning kayaks for the whitewater champions of the world! The company is definitely the global leader in the whitewater industry. The same qualities that have gone into the producing of dozens of the world's most successful whitewater kayaks, ensuring everyone can find the right kayak to paddle.

Joe Jacobi, Olympic Medalist, "Believes that Eric Jackson has made whitewater kayaking a family sport in a way that no one else in the industry has been able to do." Eric Jackson once said, "For me, looking back at my career so far, while winning a major event that I trained hard for is always something I appreciate, it is training with my kids everyday that brings my fondest memories. It was the training and competing with them that brought a much deeper meaning to it all." Eric Jackson has won more men's world championship titles, four in all, than any other kayaker in history of the sport. The Jackson family to date holds all but three of the whitewater kayaking world titles won since 2001.

Here it is the Newest Jackson Kayak the Rock Star 4.0, the 4th generation of the most decorated freestyle, play boat design ever made takes freestyle kayaking to even newer heights! Rock Star 4.0 is the most aerial boat we have ever made and designed to help everyone get out of the water for the first time, or get more air than ever before for the experienced paddler. There is two main venues we designed this boat to excel are the waves and in holes. Then there is the Antix is Jackson's first ever playable creeking, and river running, whitewater kayak. "It's a pretty exciting boat for us." says Eric. And yet the Nirvana fast, race ready creeking boat designed to get you through rapids quickly and in control of your boat at all times. "The Nirvana works really well for the high end and the beginner or intermediate," says Eric Jackson.

Finding a whitewater kayak can be tough if you don't know what you're looking for! There's a lot of variables and you'll want to know the style and performance that you'll need. We have many years of experienced on the water team members that will be glad to give you the recommendations on the in's and out's!

The greatest freestyle kayaker on the planet. "Waterfalls runs are very dangerous, because a lot can happen in a few seconds of Free Fall. The scariest part is when you're directly above it and you're making the decision whether to peel out or go over. I feel insanely nervous and there are butterflies, there 's a lot of intensity in the moment, but as you make the commitment and you're about to fall off the waterfalls things go blank and you focus on hitting the line. You feel the fear, the adrenaline kicks in and once it's over, looking back up, you realize there's nothing like It." Dane Jackson that's why. 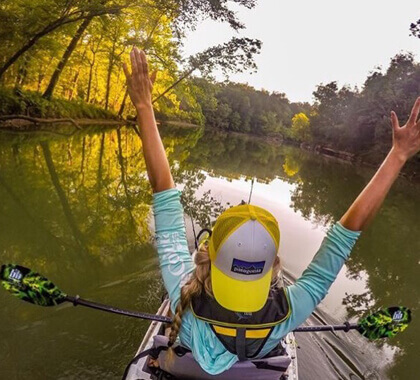